Early Sunday morning (too early) meant meeting up at a site in Oxford to take part in a Small mammal survey training session with the Oxon Mammal group.

The site is a designated ‘Local wildlife site’ and the owners wanted a survey to find out how they could promote and help the wildlife they have on their land.

Firstly we learnt all the safety rules and procedures to keeping the small mammals safe and as stress free as possible. We were all given paperwork that explained all the information and guidelines. We learnt how to set the Longworth traps, which are a metal box and a tunnel with a trap door. The traps are laid in vegetation and must be covered from the sun and insulated on the outside if the weather is cold. The nest box end must be laid slightly risen to allow any water or urine to drain out. We put in food, which was casters, bird seed and apple, the apple gives the mammal its moisture. The box is filled with hay so the mammal can make a bed. The traps have to be checked between every 4 to 12 hours.

Oxon Mammal group have the licence from Natural England to carry out these surveys. 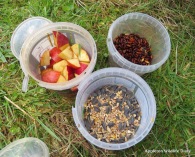 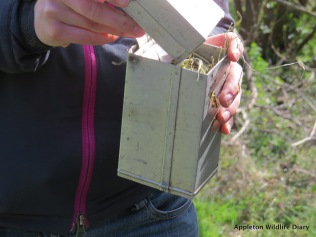 On this site there were 40 traps set in 20 different locations, each marked so every trap could be monitored and checked.

Once a Longworth box is retrieved, the trap door is checked that it has been triggered. There were about 15% of traps that were empty. The box is put into a plastic bag and opened. The tunnel is removed, checked and wiped clean. The hay in the nest box is gently removed and checked. I noticed that if it was a Wood mouse, it came jumping out straight away, where as the Voles were slower and either hid in the hay or box.

Putting the Longworth box in to the bag

Gently pulling out the hay

Gently held by the scruff

When I had a go, Maria very closely supervised me. I was very worried that I might accidentally hurt him.

Each small mammal caught is very carefully handled. They are lifted out, quickly recorded what species and whether they are male and female, then released back to where they came from. 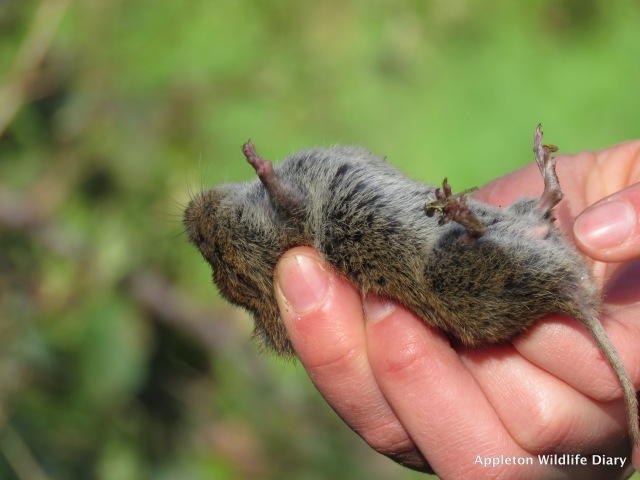 learning how to tell whether male or female

During the morning we recorded mostly wood mice, but also field voles and bank voles. 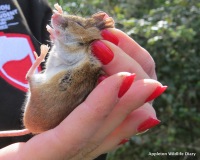 We also learnt about looking for field signs. Little paths through and under the grass.

Sometimes a small mammal will chew a hole in the Longworth box. 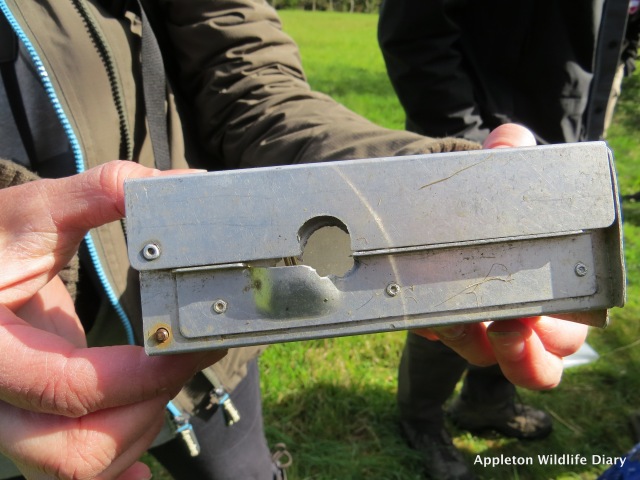 This is my diary of the wildlife where I live in Oxfordshire, and sometimes the places I visit. My passion is for British wildlife, especially Badgers and Hares. This year my debut book "Get Your Boots On" was published I am a keen amateur photographer. All the photographs on this blog are taken by myself unless stated otherwise. I am a member of A Focus on Nature, the network for Young Nature Conservationists, BBOWT, The Oxon Mammal group and The Oxfordshire Badger Group. You can also follow me on Twitter @Appletonwild Instagram appletonwild
View all posts by Alex White - Appletonwild →
This entry was posted in mammals, nature, outdoors, Oxfordshire, survey, Uncategorized, Wildlife and tagged education, mammals, mice, nature, outdoors, survey, wildlife, woodmouse. Bookmark the permalink.