Cookie is one of the Badgers from my local sett. She was born in 2014 when the sett had 10 badgers in it. She was one of three cubs that year. She is very distinctive because she has part of her ear missing. Cookie also has a diamond shaped tail, which is thin next to her rump then is very bushy. 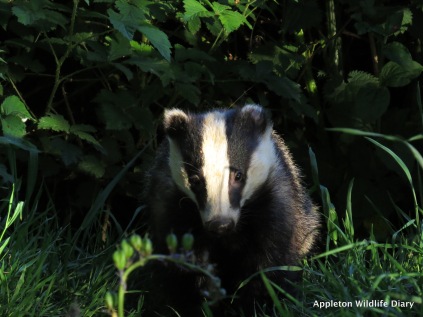 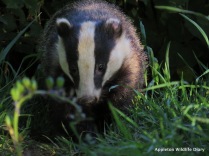 I have followed her over the past two years. Watching her grow, eat, play, interact with the rest of the badgers and collect bedding. She even came up to our house sometimes. During this time the number of Badgers in the sett went down to 6 or 7.

The sett is on private land which we are very lucky enough to have written permission from the land owner to watch the badgers.

She also is very good at finding my trail camera and sticking her face up to the lens.

On Tuesday evening I went down to the badger sett and watched Cookie and two other badgers, including Pirate (the Badger with only one eye) who we think is Cookie’s littermate. I took this photo just after 8pm. Cookie is the badger at the back.

At 9.33pm she appeared on the trail camera for the last time (Cookie is the one at the front)

At 6.30am my dad found a badger dead on the road a few hundred metres from our house. Mum went up to check and confirmed it was Cookie and that she had been hit by a car.

Unfortunately Mum also noticed that Cookie had been lactating, so there were cubs somewhere. Although all the hair on Cookie’s stomach had been worn away where she had been feeding, her teats looked like they were quite dry, so we hoped that she had her cubs as early as December and had been weaning them.

I can not explain how upset I was when I heard about Cookie. My feelings went from sadness to anger. I felt heartbroken.

I know Cookie was a wild animal and as someone who wants to photograph wild animals as a career I shouldn’t get involved, but it is very difficult not to. It made me feel like I didn’t want to carry on taking photos or blogging.

I have been overwhelmed by the amount of support on social media I have had over Cookie. I didn’t realise how many people followed what she got up to.

We took advice from lots of people about what to do about the cubs, but it was just a case of monitoring the sett day and night.

On Wednesday night it was really hard to watch the badgers without Cookie being one of them. Both Mum and I stood at the edge of the sett and cried. We kept thinking we would see her and mum had made a mistake in identifying her. Pirate was around and so was a male badger.

Mum checked the sett a few times during the day while I was at school.

On Thursday night, three badgers snuffled around the sett before heading off in to the fields.

Last night Jo came around to try and help us find the cubs. Jo and I stayed by the sett, while mum went off to check some of the outlying setts. In the first five minutes of us being there Pirate came out then another two, both of which I recognised.

Then finally what we think is a cub came out. I tried not to get really excited. This badger is about a third of the size of the others. Its face is much thinner and not the triangular shape of the adults, its face is slimmer but with a stubby nose.  Its middle strip on its face is whiter and fluffier than the adults. Finally its whole coat is fluffier and almost shiny. It was getting too dark to take any good photos.

I am slightly cautious about saying this is Cookie’s cub because it was much bigger than the cubs were this time last year. They were this size by 15th June. It seemed to be coping very well on its own. It hung around with the other badgers but not as close to them as last years cubs were with their mum. It didn’t go very far away from one of the entrance holes.

I am really hoping that this is Cookie’s cub, and I am going to carry on monitoring the sett for the next few weeks.

This is my diary of the wildlife where I live in Oxfordshire, and sometimes the places I visit. My passion is for British wildlife, especially Badgers and Hares. This year my debut book "Get Your Boots On" was published I am a keen amateur photographer. All the photographs on this blog are taken by myself unless stated otherwise. I am a member of A Focus on Nature, the network for Young Nature Conservationists, BBOWT, The Oxon Mammal group and The Oxfordshire Badger Group. You can also follow me on Twitter @Appletonwild Instagram appletonwild
View all posts by Alex White - Appletonwild →
This entry was posted in Badgers, mammals, nature, outdoors, Oxfordshire, Rural life, Uncategorized, Wildlife, Wildlife photography and tagged Badgers, mammals, nature, outdoors, trail camera, wildlife, woodland, Woods. Bookmark the permalink.