Over the last six months I have been on the trail for Little Owls.

At the beginning of the year I heard a call that I had heard regularly from a distance but this time it was much closer. After going home and researching the sound I found out it was a Little Owl.

I tracked down where the sound was coming from and started seeing glimpses of a Little Owl on some hay bales. Unfortunately I wasn’t quick enough to get a photo or the hedge was always blocking my view. Sometimes I could hear the call coming from the hay bales and a reply coming from over on the farm.

Most evenings throughout March I spotted a Little Owl sat on the side of the barn or on the tree stump.

During May the Little owl could be heard making contact calls early evening and it even came to our garden.

For about another month I didn’t see any signs of Little Owls until one evening I spotted one sat on a pile of logs. From then on, each night around 8pm to 9:30pm it sat there just as the sun disappeared behind the horizon.

In the past week I have noticed that not only is the adult sat on the top of the logs but just below, extremely well camouflaged, about half way down is one of this year’s young.

If I stand and listen carefully I can hear its raspy begging call.

Little owls aren’t native to the UK, they have been here since the late 19th Century.

They can been seen on farmland, hedgerows, often where cows or sheep have been grazing, and parkland. They eat mostly beetles, worms, moths, small mammals and birds and can sometimes be spotted running along the ground after prey. This is something I’d like to get a photo of next. 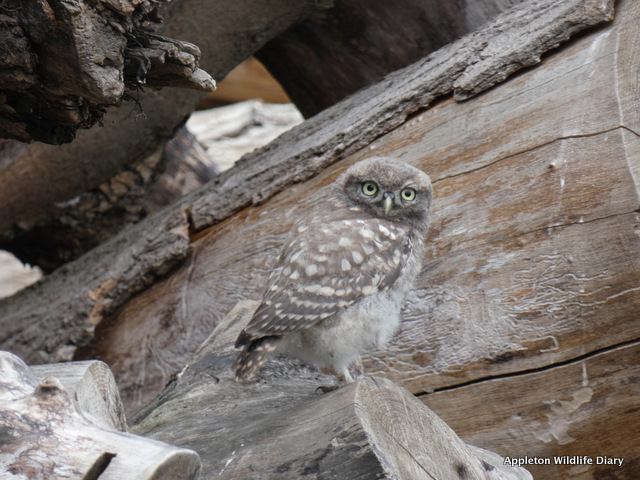 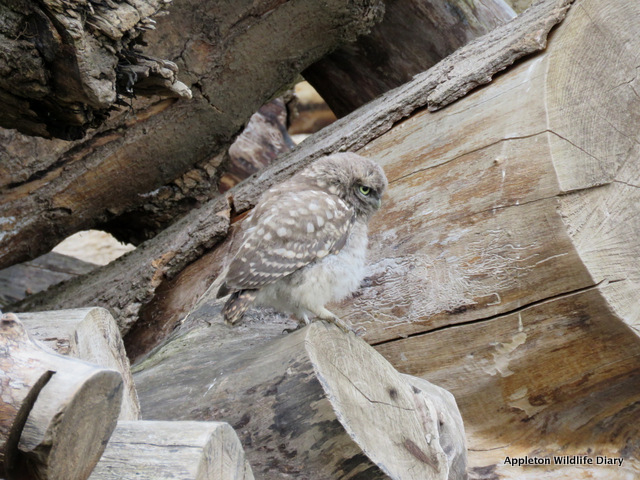 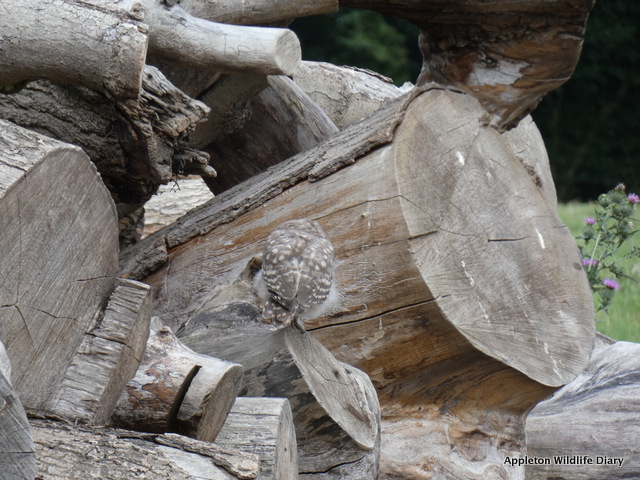 This is my diary of the wildlife where I live in Oxfordshire, and sometimes the places I visit. My passion is for British wildlife, especially Badgers and Hares. This year my debut book "Get Your Boots On" was published I am a keen amateur photographer. All the photographs on this blog are taken by myself unless stated otherwise. I am a member of A Focus on Nature, the network for Young Nature Conservationists, BBOWT, The Oxon Mammal group and The Oxfordshire Badger Group. You can also follow me on Twitter @Appletonwild Instagram appletonwild
View all posts by Alex White - Appletonwild →
This entry was posted in birds, nature, outdoors, Oxfordshire, photography, Uncategorized, Wildlife, Wildlife photography and tagged Blogging, Environment, Little owl, nature, owl, Oxfordshire, wildlife, Wildlife photography. Bookmark the permalink.