As the days get shorter I rely on my trail camera more and more to find out what is going on around my local patch.

I often get asked which is the best trail camera to use. It is a hard question to answer as it depends on how much money you want to spend, what you are hoping to film and what you want the footage for.

I did a review nearly two years ago of a Little Acorn versus a Nature View Bushnell. Now I thought I’d look at it a bit deeper, adding a couple more models in. I think the footage speaks for itself.

I placed 4 different models of trail cameras out in the same part of the wood over one night, as the best way to compare models is to compare the film footage they take. 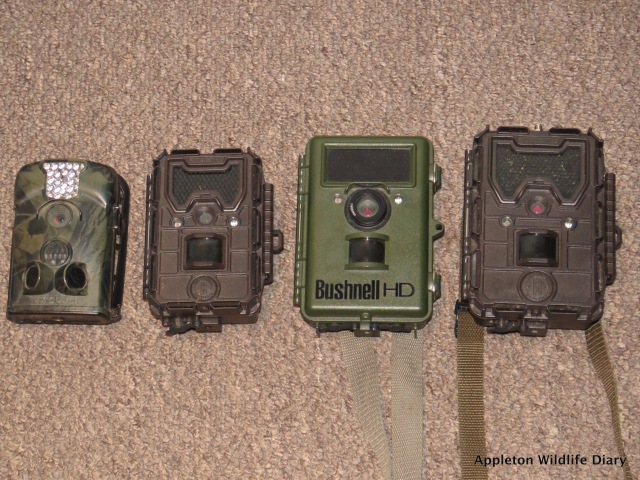 Of course, it isn’t just about putting a trail camera out and hoping for the best, it is about knowing what animal you want to film, where that animal is likely to appear, and knowing where to point the camera.

All 4 cameras take still and film, they all can record sound, as well as time and date stamp the footage. Each camera can film in colour during the day, and at night in black and white using infrared. All the cameras use PIR sensors and each camera is programmable to film particular lengths and have set gaps before it starts filming again.

I secure each camera using an elasticated luggage strap and a chain and padlock. 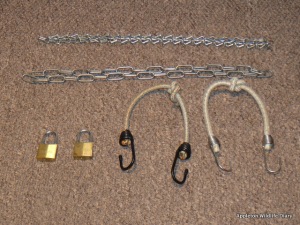 I’ve made a short film with each camera to show the difference in quality.

The first camera is The Little Acorn 5210A. 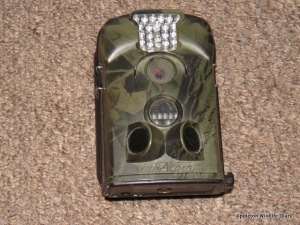 I placed this camera on a well used deer path on the top of a bank by a stream. I’ve seen foxes, deers, badgers and a polecat use this path.

I really like this camera, it’s easy to set up, films really well at night, it is small and light enough to fit in a coat pocket.

Downside is the LED IR flash shines red which the animals notice, the battery cover is quite flimsy and breaks easily. When I padlock the Little Acorn, the front could still be stolen as it is completely detachable.

The second camera is the Bushnell Trophy Cam HD Model 119676

This camera was placed in an open patch behind the badger sett. I’m not sure who is the first badger, the second one is Pirate, notice the damaged left eye. This is the first time I’ve seen Pirate in months. The fox, I think is one of the cubs and is really not sure about the two Roe deer.

This camera has a no glow black LED’s, it is a very sturdy camera. The closing lock is very robust.

The actual film is a lot more grainy than the Little Acorn, although it has black LED’s you can hear a slight humming while it is filming, which close up the badgers and foxes can also hear.

I placed this camera at the other side of the badger sett. The badger is the one I filmed a couple of weeks ago with the broken tail and damaged right ear. The two foxes are possibly two of this years cubs. Again one of the foxes with one of the deers.

Very similar to the last camera except slightly bigger. Again no glow LED’s but with this one there is no humming. The picture is marginally better.

This camera is wireless but I have not yet used this facility.

The last camera is The Bushnell Nature View HD model 119740

Unfortunately I put this camera in the least busiest spot on this particular night, but straight away you can see the quality of the footage.

This trail camera comes with different lenses to focus at different lengths, it also comes with a view finder. The quality of the film is so much better, in my clip you can really see the difference to the previous 3 clips. Look at the detail of the nettles.

Although this camera doesn’t make a sound and has no glow LED as you can see in the film the fox knows it is there. I’m not sure whether it can smell it or perhaps the fox can hear it.

This is my favourite trail camera but I do worry about it when I leave it out incase it gets stolen, and it is large and heavy.

My second favourite is the Little Acorn, for a reasonably small and cheap trail camera it does work really well. I’ve had it around 5 years now and it is still filming some great footage.

For the four trail cameras I have reviewed the prices can vary.

There are now lots of other makes of trail cameras on the market which I have no experience of and would love to hear about if anyone reading this uses other makes/models.

These are just my personal views based on my experiences using my four different cameras. I’m always pleased when any of my cameras show up a new animal, new behaviour or particularly a badger I haven’t seen for a while.

I will soon do another blog comparing the same trail cameras filming in day light.

A few people have mentioned batteries, and which ones are the best for trail cameras and why don’t they last very long.

I only use my camera for short periods of time, for a few hours or over night, rather than leaving them out for days or weeks in the same place, so I can’t comment on how well the batteries do in that situation.

I also don’t take much notice of the length of time the batteries last against how many hours they have been operating for. Perhaps I should do a study in to it over the winter.

Some of the things I have noticed.

• Night time filming uses the batteries up quicker as it has to power the LED’s as well.

• Lithium batteries are more expensive but last much longer

• If I do use alkaline or lithium batteries and they stop working in the trail camera, they will still work perfectly well in something like a Xbox remote control for another few months.

This article seems to have covered most of the pros and cons of the different batteries. After reading it I think I might save up for a decent set of rechargeable batteries.

This is my diary of the wildlife where I live in Oxfordshire, and sometimes the places I visit. My passion is for British wildlife, especially Badgers and Hares. This year my debut book "Get Your Boots On" was published I am a keen amateur photographer. All the photographs on this blog are taken by myself unless stated otherwise. I am a member of A Focus on Nature, the network for Young Nature Conservationists, BBOWT, The Oxon Mammal group and The Oxfordshire Badger Group. You can also follow me on Twitter @Appletonwild Instagram appletonwild
View all posts by Alex White - Appletonwild →
This entry was posted in Badgers, Blogging, fox, mammals, nature, outdoors, Oxfordshire, trail camera, Uncategorized, Wildlife and tagged Acorn trail camera, Badger, Bushnell, Deer, foxes, trail camera, trail camera review. Bookmark the permalink.