It’s great when you come across something you have never noticed before.

There are 69  species of Longhorn beetles in Britain and I probably walk passed plenty every day while out taking photos, but I’ve never really stopped and looked at them before. They have long antennae, which are often as long as or longer than the beetle’s body

This one is a Spotted Longhorn beetle (Rutpela maculata). It can be found along hedgerows and woodland margins during May until August. It is one of the easy ones to spot, the adults are commonly found on ‘umbel flowers’ (I had to look that up). The word umbel was taken to be used in Botany from Latin umbella “parasol, sunshade. 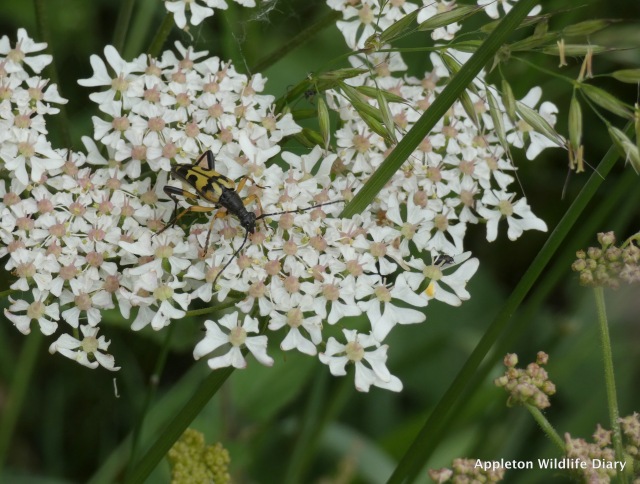 This one is mainly found in meadows and hedgerows. Adults feed on Hogweed, Cow Parsley and nettles. Most seen in May and June.

This is my diary of the wildlife where I live in Oxfordshire, and sometimes the places I visit. My passion is for British wildlife, especially Badgers and Hares. This year my debut book "Get Your Boots On" was published I am a keen amateur photographer. All the photographs on this blog are taken by myself unless stated otherwise. I am a member of A Focus on Nature, the network for Young Nature Conservationists, BBOWT, The Oxon Mammal group and The Oxfordshire Badger Group. You can also follow me on Twitter @Appletonwild Instagram appletonwild
View all posts by Alex White - Appletonwild →
This entry was posted in 30 Days Wild, Environment, hedgerows, insects, Local patch, nature, outdoors, Oxfordshire, Uncategorized, Wildflowers, Wildlife, Wildlife photography and tagged 30 Days Wild, beetles, Environment, Golden-bloomed grey longhorn beetle, insects, nature, Oxfordshire, Spotted longhorn beetle, Uk nature, Wildflowers, wildlife, Wildlife photography. Bookmark the permalink.